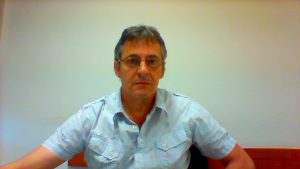 Roger MARTIN-CLOUAIRE was a senior researcher at INRAE (National Research Institute for Agriculture, Food and Environment, former INRA). He holds a Masters in Biomedical Engineering (1982) from Saskatchewan University (Canada) and a PhD (1986) in Artificial Intelligence (AI) from Toulouse University. His research works in these graduate student years focussed primarily on developing and implementing possibility theory models of approximate reasoning in knowledge-based systems.

He joined INRA in 1987 in the mathematics and computer science department where he conducted research projects on various farmers' decision problems and agrosystem management processes. He was the director of the laboratory Unité de Biométrie et Intelligence Artificielle (MIAT presently) from October 2006 to the end of 2010.

Ph.D. thesis of C. Daydé (december 2013-december 2016):
The thesis proposal focuses on how a farm manager is making operational decisions (choice of actions). It involves characterizing and formalizing the types of information used in the decision-making process and investigating the mechanisms by which they are manipulated and by which constraints, desires and judgement are combined. In order to enable an experimental investigation of such behavior considered as a research object the thesis work should ultimately provide a general and implemented model of the decision process, hopefully covering the variety of decision-making behaviors identified. To be faithful to the reality, the choice has to be done with little processing in order to be compatible with the paucity of information and the fast pace of decision-making observed in farmers’ practices. The investigation dwells on a body of approaches having their roots in qualitative decision, bounded rationality and behavioral economics. For more details see Investigating operational decision-making in agriculture. See also Modelling operational decision-making in agriculture for a BDI-based modelling approach.

FARMATCH project: The diversity and complementarities of spatio-temporal production patterns and products in livestock systems (ranging from grassland-based to mixed-crop systems) are potential assets to dampen the effects of climatic variability and to adapt to changing climatic or economic contexts. Unfortunately what seems to improve the robustness and efficiency of a livestock system (or reduce its vulnerability) is at the same time increasing its complexity due to the need to manage dynamically several processes that interact in space and time. The main objectives of the FARMATCH project are to:

- analyse adaptation made by livestock farmers in the past and develop a model-based method to assess exposure to climate change and variability;

- develop and diffuse a participatory framework that can support the design of livestock systems adapted to particular climatic, economic, technical, environmental and social aspiration factors.

The workshop-based design framework involves farmers and/or advisors and researchers. Through such workshops the design process exploits intertwining of scientific knowledge and experiential and tacit knowledge of the farmers and advisors. Vulnerability and sustainability (economic and environmental in particular) of the designed systems are assessed thanks to various kinds of models that are also used to convey efficiently knowledge and ensure that a common basis is shared among the participants. The project is structured into 3 WPs: 1- Characterizing vulnerability, 2- Generic principles governing participatory and model-based redesign, and 3- Experimentation with and diffusion of the participatory design framework. See http://dx.doi.org/10.1016/j.jenvman.2017.02.050.

A farm system  is not simply a collection of crops and animals to which one can apply simple management rules and expect immediate results. Rather it is a complicated interwoven mesh of soils, plants, animals,  workers, other inputs and environmental influence that are manipulated by  the farmer who, given his knowledge, preferences and resources attempts to achieve his aspirations. Agroecology is a scientific discipline that uses ecological theory to study, design, manage and evaluate agricultural systems that are productive but also resource conserving. The growth of practical knowledge about the production, maintenace and exploitation of ecosystem service is essential toward the implementation of agroecology. This depends largely on the accumulation and organization of information produced by experimental or descriptive research and monitoring activities. Farmers have a key role to play in this “integrative approach” where progress is achieved through the integration of experiential knowledge from different domains (crop, animal, ecology, management,business). A continual learning process must be put in place and the most efficient methods available used to inform this process.See Ontological foundation of ecosystem services and the human dimension of agroecosystems.